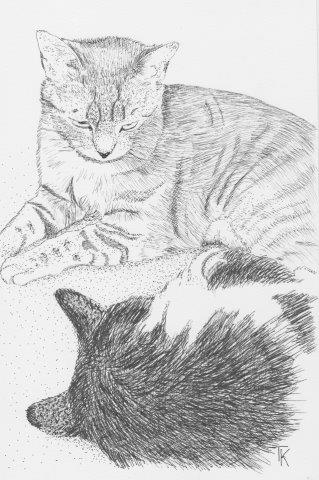 This was an unsolicited commission.  I suppose that isn’t quite right.  Squeak had recently passed away, preceded by Bennie several years earlier.  The human with whom they lived asked me to do a pastel and watercolor of Squeak, and one of the photos she gave me for reference was this one.  My art friend suggested I should do a watercolor of Squeak from this as it was a nice clear snapshot, prompting me to ask, “You don’t live with a cat, do you?”  She never had, so was surprised when I told her, “Squeak is very annoyed in this photo.”  That is a face that says, “You’re pushing your luck, bucko; just try poking me again!”  I thought it was very funny and would make a good ink.  So it was not really commissioned, but it sold anyway.

Their human told me that Bennie was fluffy but lightweight and Squeak was built densely, so Bennie would boss and boss Squeak, but when she had had enough she would sit on him. 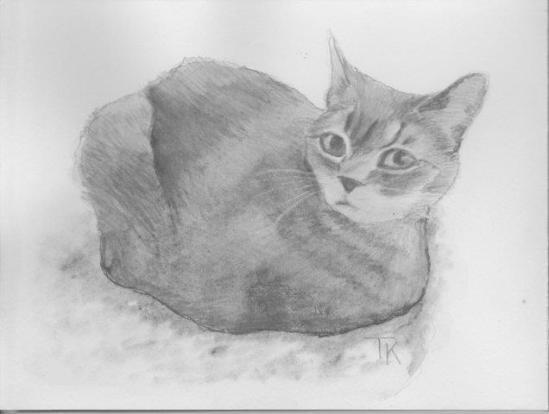 This is a water-soluble graphite sketch of Squeak.  So it’s like sketching with regular pencils, but with these special ones (from Derwent), somehow the graphite will move around with water.  This is the first sort of finished sketch I’ve done with these, so I’m not sure of the technique.  I did discover that I could use one of them as sort of an ink stick, dabbing it with my wet brush and then painting with it.  I used “charcoal white” for the whiskers and eye spot.

It has been a while since I’ve done anything art-related, but I offered some prints for sale to benefit Animal Rights Rochester at the Alternative Fair yesterday.  Here are some of the framed prints I had out.  I sold Lupito. 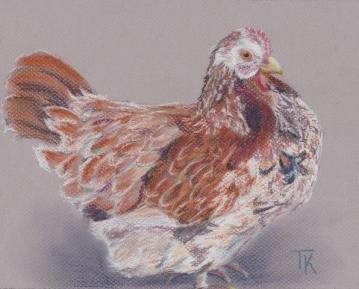 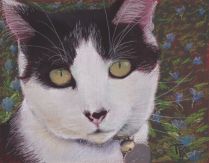 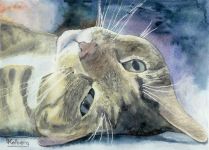 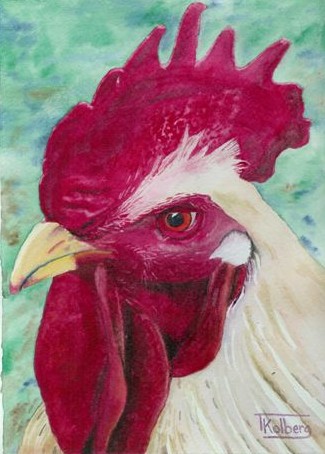 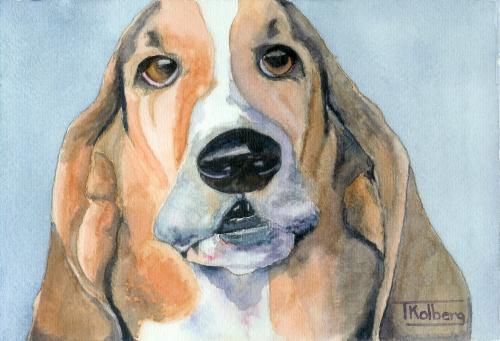 I donated three prints to Rochester VegFest‘s Silent Auction at the Friday night event, September 15th.  My friend had framed them and the proceeds went to VegFest. 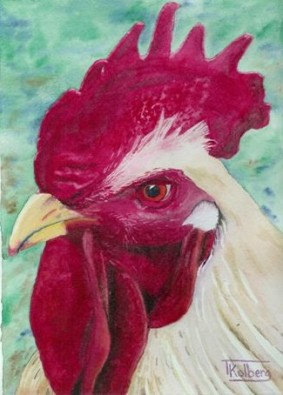 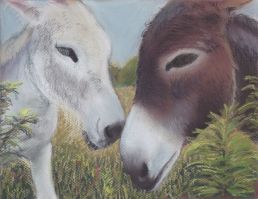 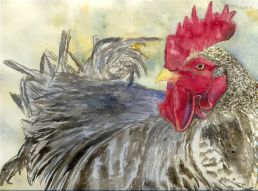 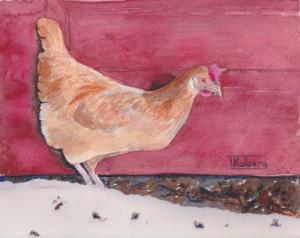 Maria was accepted into the PAG’s Winter Show.  She’ll be hanging around the Pittsford Federal Credit Union in Mendon, NY until February.

I was chicken-sitting for neighbors one winter a few years back.  There had been a lot of snow and while the chickens loved to peck the snow, it was way too deep for them to walk in, so they had been stuck in a small patio I was shoveling for them.

This was the first warm day and the snow began to melt around objects such as this free-standing door.  They were thrilled to sneak along the edges of the snow and peck in the dirt for greens and roots.

I have been doing a series of casual 6 x 6’s in various media, usually on the back of scrap or abandoned paintings.  I didn’t sign any, with the thought of taking them to the RoCo 6x6x2014 show.

The first three are from a Farm Sanctuary calendar, the cub was from some magazine, and the other three are my own photos. 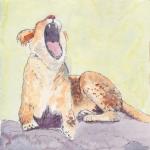 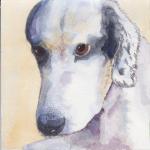